Notes on the glossary project, to be either named Liquid Glossary or hyperGlossary.  Project website: https://hyperglossary.info

The glossary entries can be created and stored as WordPress blog post articles with special, though human-understandable formatting. The author can create an entry in WordPress by simply assigning the Category ‘[Glossary Entry]’ and that’s it. The user can also use external systems to create the entry in order to add further, useful meta-data, such as this in Liquid | Flow: 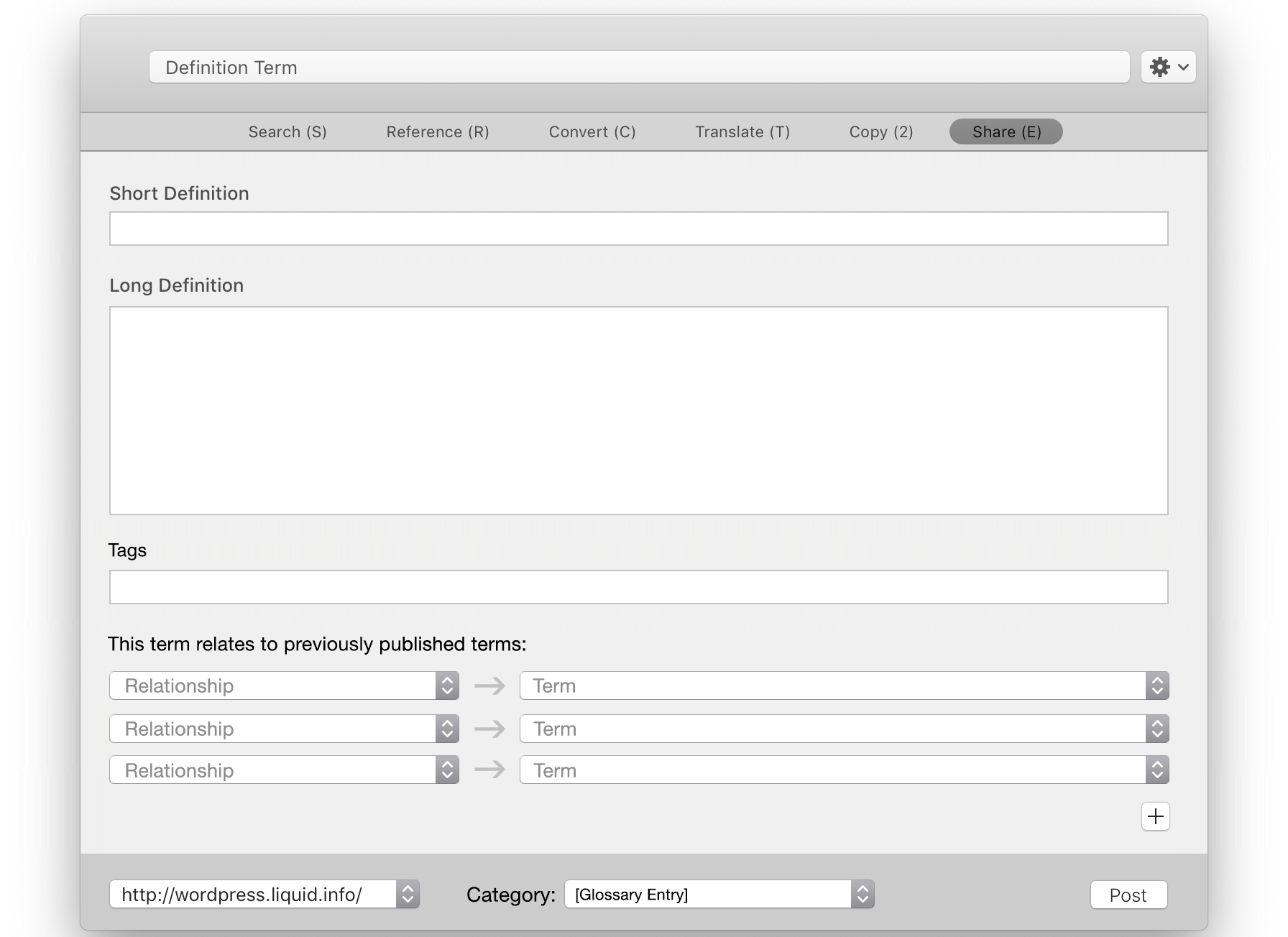 In this way the user can add a short and (optional) long definition and then also optionally choose from previously defined terms below, including choosing from a pop-up what the relationship. The ‘Relationship’ pop-up as ‘Add Term’ option for the user to add a term in a dialog box.

Glossary entries can be authored from anywhere and stored as blog posts on a wordpress server. The reason for this is that wordpress pages are standard HTML pages and therefore are readable through many systems without concern for what might happen to any one specific access mechanism.

The glossary entry has the following attributes:

There are many ways to access the glossary data for the user and we will need to both experiment to find an optimal solution for the general user as a default option and provide naturally accessible options for any user with specific needs or preferences. We will be building a WordPress plugin to provide this functionality:

User can select text and if there is no glossary text selected or partially selected, a blue dot appears for the user to optionally mouse over:

If the user chooses to, options are revealed, including: To Copy as Citation, Copy High Resolution Link, perform searches, including of the current blog and choose to ‘highlight first occurrence of all glossary entries’:

The user can furthermore mouse over the heading ‘Glossary’ for it to expand and show options. Further display options can include showing the first sentence of any glossary definition in the document in [hard brackets] which can be clicked on, with some icon* or through colours etc.

The very clear formatting of the glossary entries allows the system to feed any knowledge graph including the liquid space graph, where relationships are retained and can be shown and interacted with visually.

This approach is very simple and experimental, it could very well be characterised as a hack, but the reason for the work is to provide something useful in daily work which can then be improved upon in collaboration with users. Issues for the future include:

The question of whether the reader wants to access a glossary entry made when the document was authored or later, if the document was read much later. A solution to this can be to allow the built-in versioning system in WordPress to be surfaced to give access to earlier versions, if any are available or to lock the entries into the document on publishing, not to keep them separate.